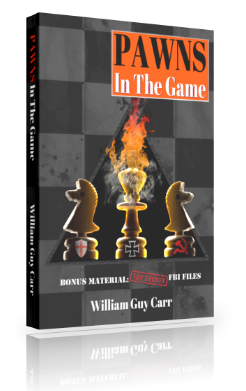 Pawns In The Game - FBI Edition

The international conspiracy explained.  The best single work available on the evil conspiracy that has been responsible for the devastating wars and continuing conflicts of the past century. They are now close to its ultimate goal of total world domination through a dictatorial one world government. William Guy Carr, a noted author who had a distinguished career as a Canadian naval officer, including outstanding service during World War II, in this work of shocking revelations, shows how the conspiracy of atheistic-materialistic men have manipulated world events to secure ultimate control of the wealth, natural resources and man-power of the entire world. This satanic conspiracy, Carr goes on to show, strives to abolish Christianity and all religions, dismantle all ordered national governments, weaken patriotism, and destroy traditional family life.   Pawns in the Game traces the history of the great conspiracy and the World Revolutionary Movement, showing the roles of the Illuminati, the Freemasons, the Communists, and the United Nations.  This book shows the conspiracy as part in the American Revolution, the French Revolution, the Communist takeover of Russia, and World War II. In carrying out their long-range plan, Carr shows how the conspirators have come ever closer to reaching their goal through infiltration of key centers of power and influence, by gaining control of central banks, the world money supply, and manipulate the media.  In this important rousing book, the author sounds the alarm to awaken Christians and patriots to the grave danger of World War Three and an oppressive New World Order. He presents practical measures to expose, counter and ultimately defeat the forces of evil.

BONUS materials in this edition are never seen before, recently unclassified, FBI files on their investigations into the author and his organizations.

If you just purchased this book and want to learn more, listen to a speech by the author about the contents of the book, Pawns In The Game. 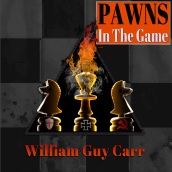